The Ins and Outs of Billboard Banner Advertising 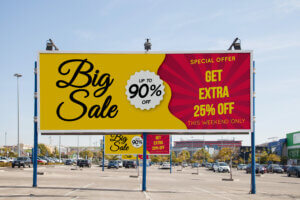 What Billboard Advertising is and How it Works

Billboard advertising is one of the most effective forms of advertising because it’s so visible and is never turned off. In order to be effective, however, your billboard must stand out from the competition and capture the attention of drivers and pedestrians.

What Billboard Advertising Can Do for You

How to Create a Billboard Banner Ad

When it comes to advertising, there are a variety of mediums to choose from. Billboards are a tried and true advertising option that continues to be popular today. If you’re considering using billboards as part of your marketing plan, here’s what you need to know.

Billboard ads can be purchased on a per-month basis or as a one-time purchase. The cost of billboard advertising varies depending on location, size, and time of year. Generally, the more high traffic the location, the more expensive the ad will be.

Creating a billboard ad is similar to creating any other type of advertisement. You’ll need to come up with a catchy headline and body copy that will persuade people to check out your product or service. You’ll also need to create an eye-catching design that will stand out against the competition.

Billboard advertising is a great way to reach a large audience quickly and effectively. It is also one of the most affordable forms of advertising. Billboards can be seen by people driving in cars and on buses, as well as pedestrians.

Billboards banner is especially effective at reaching people who are not watching television or reading the newspaper. They provide a quick, easy way for businesses to get their message out to the public.

Billboard advertising can also be customized to target a specific audience by location. This makes it a very effective form of advertising for small businesses that cannot afford to buy airtime on television or in newspapers.